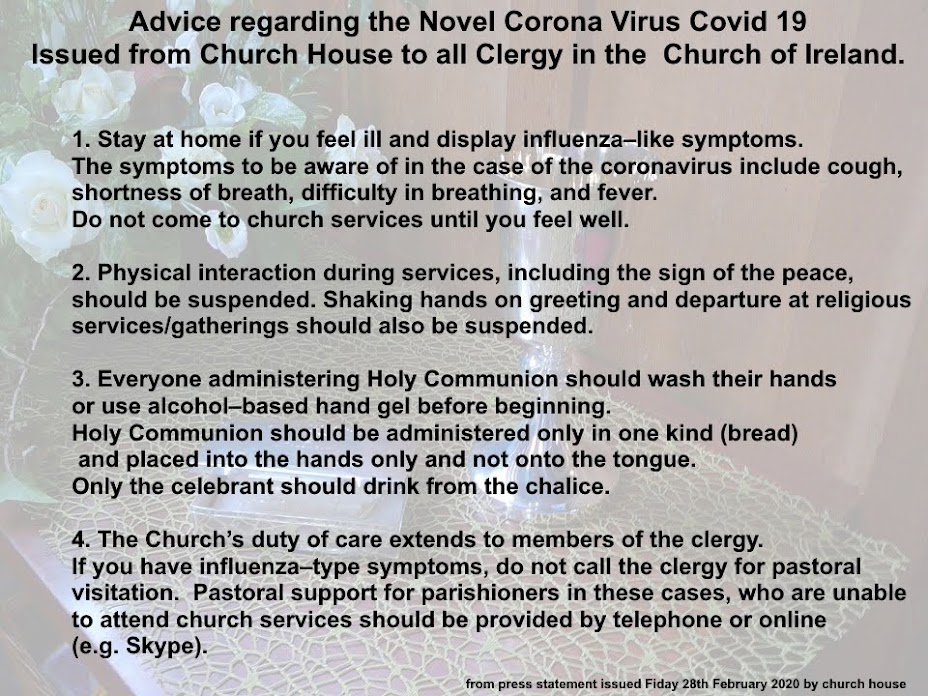 The Act of Remembrance on Sunday 8th November will take place at 10.45am before the 11.00am Confirmation service.
Posted by St Maelruain's Parish at 14:27

A word from William...

On 10th October as part of the national architects ‘open house’, a opportunity for free access to buildings that are not normally open to the public on Saturdays, the church was open and also as part of a new Iwalk of Tallaght. The local Iwalk is an initiative by South Dublin County Council allowing you to download onto your Ipod a walking tour of Tallaght.

On the same day the Indian congregation who use our Church on Saturdays were filming a programme to be broadcast on Christmas Day on Indian TV. They asked me to record a Christmas message.

On the 11th October Martin O’Connor came to talk to us at our 11am service on the work of the Bishop’s Appeal. Bishops' Appeal does not engage directly in development work itself, but channels funds through development agencies and partner churches who are already in place in areas of need.

Bishops' Appeal contributes to relief of suffering in time of emergencies whether natural or man-made. However, their main concern is to support ongoing development in the fields of sustainable agriculture, health, including HIV/AIDS, and education in many parts of the world. They aim to enable people to have more control over their own lives and futures so that they are less dependent on others than they are today.

On October 16th we were delighted to welcome Rev Adrienne Galligan, Rector of Crumlin and Chaplelizod, who preached at our Friday evening Harvest service. Thank you to the ladies who so beautifully decorated the Church for Harvest and to those who provided the Harvest supper.

On the following Sunday the 18th we had our Girl’s Brigade Enrolment Service and Children’s Harvest. I would like to thank the GB captain Carol Fox and her group of leader for all the hard work they do with the girls and also for providing the refreshments after the service.

We are looking forward to our annual Christmas Sing Along on Friday 4th December which although a fundraiser also proves to be a good parish social evening. Come along and get into the festive spirit!

Please return your filled shoe boxes for Operation Christmas Child shoe box appeal for Christmas 2009 on 8th November and remember to include €3 to cover costs. Please pick up a leaflet in the Church porch for more information or look up their web site www.samaritanspurse.ie

The local distributors of Operation Christmas Child are looking for volunteers to check the boxes. If you would like to help, they are meeting in the Old Glen Abbey building (opposite Jacob’s factory) in the week following the return deadline from 10am – 2pm and from 6.30pm – 9.30pm Ph. 087 622 2184
Posted by St Maelruain's Parish at 14:26

The AGM of the Indoor Bowling Association took place on 22nd. Sept. in our parish hall. The Association President Billy Gould handed over the chain of office to the newly elected president Trevor Peare. We wish Trevor a successful year as president.

The club has completed team selections for all competitions, and all dates have now been arranged for League Matches. We wish all teams the best of luck in their forthcoming matches, and hope all players enjoy the seasons bowling. Our first match is set for Tuesday 3rd. November against Harold’s Cross Club.
Posted by St Maelruain's Parish at 14:25

Our enrolment service will take place on Sunday November 1st, when we look forward to meeting the members of the Christian Motorbike Club who will visit and speak to us at the service. We look forward to a full attendance at this service when all officers and members will be enrolled for the coming year. We are very lucky to have a team of dedicated leaders in the company and we hope they will be well supported by parents and friends at the service.

Founders Day service in St. Anne’s Church was well attended. It was, as usual a lovely service and we were very fortunate to have a mild afternoon for the march past. One of our junior boys, Senan Barrett read at the service, and though the reading was long he did an excellent job. Well done Senan.

We are very grateful to Senans' Dad, Anthony Barrett, who is working with the boys in Bible Class. Anthony joined us as a new leader this year and is working with junior section and company section.
Posted by St Maelruain's Parish at 14:24

Thank goodness we have managed to keep the “Swine Flu” at bay. The new sanitizers which we installed during the summer are obviously helping. The children are particularly vigilant in their use.

The various field-trips which we went on during September went very well.

Ms. Caroline Rountree has taken over the Green Schools project while Mrs. Edel Beckett is on Maternity Leave. A new committee has been formed and has met for the first time this year already.

Ms. Annette Boles is doing Early Irish Settlements at the moment and she took her 3rd and 4th class to the National Heritage Centre in Ferrycarrig, Co. Wexford on Friday 9th October. It’s a long trip but well worth it.

Ms. Mary Conroy, our National Educational Psychological Service (NEPS) psychologist will be working with us on Thursday 15th October on the Continuum Support to Staff Workshop.

5th and 6th class will be going to Armagh Planetarium on Friday 13th November in conjunction with their project on Astronomy.

We have a little surprise organised for the children on Thursday 22nd so obviously we can’t let “the cat out of the bag” at this stage. Watch this space!

The children are involved in both, the MS ReadaThon and the Samaritan’s Purse, Operation Christmas Child, again this year.

A big thank you to Ms. Miriam Gibney who put the school forward for an Impact Award from GlaxoSmithKline, Miriam came to the school on Monday 12th October and presented us with a cheque for €300.00.

School will close for the mid-term break on Friday 23rd October at 12.00pm, re-opening on Monday 2nd November.
Posted by St Maelruain's Parish at 14:22

On Saturday 17th October, twelve of us travelled to Russborough House. We enjoyed a tour, walk in the grounds in glorious sunshine and lunch in the restaurant.

Our next meeting will be on Monday 9th November when Martha Waller will give a talk on prison chaplaincy.

Looking forward to seeing you then - Miriam Gibney
Posted by St Maelruain's Parish at 14:21

The Archbishop will be coming to the parish on Sunday 8th November for our confirmation service at 11.00am. Please pray for the candidates: Mathew Dillion, Denzel Ezekwe, Denzel Nwakor, Zoe Smart and Callum Street as they prepare for their confirmation.
Posted by St Maelruain's Parish at 14:20

Anne O’Halloran has put together a November Bible Quiz in aid of Parish Funds. It is available from Anne after Church on Sundays. The cost of the quiz is €3.
Posted by St Maelruain's Parish at 14:19

We held our October Drive on Monday 19th with a good crowd in attendance.

Thanks to all who donated raffle prizes, they are much appreciated each month. Also a special thanks to Boswell Huxley who is back helping us again.

Looking forward to another good night at the November drive to held on Monday 16th in the Small Hall at 8.00pm. - George
Posted by St Maelruain's Parish at 14:19

On October 27th the funeral of Sarah Gallagher took place here in St. Maelruain’s. Sarah died in the Orwell Nursing Home but had come to live here in the parish with her daughter Jean Poole (who had passed away last February) and with Jean’s daughter Lesley. We extend our deepest condolences to Sarah’s family and friends.
Posted by St Maelruain's Parish at 14:18

On Sunday 11th October Eoghan Beckett was baptised. Eoghan is the baby son of Edel (nee McGlynn), one of our parish school’s teachers and David, who is a primary school teacher in Clondalkin parish school. We pray for Eoghan and his family as he begins his Christian life.
Posted by St Maelruain's Parish at 14:17

On 23rd October Ruth Lillie who had lived in the parish in recent years married Cormac O’Connell in her home parish of Boyle. We wish Ruth and Cormac well in their new home in Limerick, where Cormac is from.
Posted by St Maelruain's Parish at 14:17

The music group is looking for new members, they sing once a month at the family service and usually practice twice a month on Tuesdays at 7.45pm. Please contact Valerie on 462 1044 for more information.
Posted by St Maelruain's Parish at 14:16

Returning to In Church Worship

Return to In–Church Worship Protocols for RoI and NI 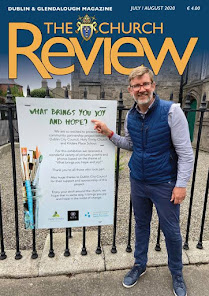 The Diocean Magazine for The United Diocese of Dublin and Glendalough

every Thursday 8pm from 21st September

Christian worship has continued on this site for over twelve hundred years since the Celtic saint, Maelruain, founded a monastery here in the 8th Century. This monastery became an important centre of spiritual life: The Ceilí Dé (also known as Culdees, or the servants of God) had their headquarters here.
Three outstanding religious texts... [Read More]

This site is moderated by St Maelruains Parish.

Receive Notifications of new posts made on this site.

Or have new posts sent directly to your Email. (You can Unsubscribe at any time).You must follow the instructions in a confirmation email sent to your Inbox to activate the email subscription!